Another patient for the “major brain deficiency” ward

Burglar breaks into house. Burglar takes shower. Homeowner returns. Burglar calls 911, worried that homeowner might have a gun. No joke, no lie.

That about covers it

My favorite webcomic yet again makes me wonder whether it’s spying on my brain:

With gas prices rising, it looks like there’s increasing pressure to tap the Strategic Petroleum Reserve to alleviate some of the pain. Now, I’m no fan of $4-a-gallon gas, but is this a strategic emergency? No, it’s me being pissed that my commute got $10 more expensive this month. Hardly a national emergency. Isn’t this thing supposed to be used, you know, strategically?

Then again, it is indeed a strategic emergency from a political perspective. No matter what party is in the majority, if voters drive to the polls with cars burning gas that cost four bucks a gallon or more, that majority is going to get slaughtered.

Total failure to even identify a valid objective

Alan Gura and company have a new brief in the ongoing Ezell case in which Chicago required range training to get a gun license and then banned ranges.

Chicago’s arguments are so idiotic and insulting that it’s going to be a pretty open-and-shut case. There are so many money quotes that you really have to read it, but here’s one of my favorites (emphasis added):

Scudiero testified that she has never been to a gun range, has never read or studied any literature about gun ranges, has no experience or education with either the structure or operation of gun ranges, and has never investigated gun ranges for zoning purposes. App. 95, 104.

Nonetheless, the lower court allowed Scudiero to testify as to what she “imagine[s]” happens at a gun range. App. 96-97. Based on this imagination, Scudiero opined that gun ranges should be zoned as an “intense” use, similar to taverns, rock crushing facilities, salvage yards, incinerators, drive-through facilities, and adult establishments. Specifically, Scudiero opined gun ranges belong in manufacturing districts, but even then, only on a case-by-case special use basis. App. 98-101. However, Scudiero had no knowledge of whether gun ranges emit noise or emissions of any kind. App. 105-06.

And another great one:

The end result in this case would be the same under either strict or intermediate scrutiny, which requires that there be a “strong showing” that the regulation is “substantially related to an important governmental objective.” Skoien, 614 F.3d at 641 (citations omitted). Often times, as in Skoien, Yancey, or Williams, the governmental objective in gun regulation is not elusive, leaving courts to struggle with difficult questions of balancing and breadth. What makes this an unusually clear Second Amendment case is the government’s total failure to even identify a valid objective. Defendant’s attorney advised the City Council that it could do whatever it believed to be “reasonable” regarding gun ranges, and so the City Council simply banned ranges.

Also unavailing is the claim that ranges can be banned because regulating them would overburden Defendant. Perhaps the people should be thankful Chicago does not find the “need” to regulate bookstores and churches too burdensome. The court below did not quite rely upon this argument, ruling only that the absence of regulation rendered it unsafe to enjoin the ban. It nonetheless merits mention that a “right” entitles individuals to do something, and is not dependent on the graces of the government. The notion that the government may ban outright whatever it finds too difficult to regulate is not a constitutional doctrine. If gun ranges are constitutionally protected, Defendant’s wholly optional regulatory costs are irrelevant. People do not lose their rights because the government decides it is too expensive to regulate or otherwise accommodate them.

Through the unbelievable dedication of AJAX22, video footage of the vote on the Hughes Amendment has been unearthed—and the ’86 ban on new machine gun registrations was actually NOT passed but was simply recorded as such. It’s one of the worst examples of scummy politicking and under-the-table sleezemaking I’ve ever seen. Here, take a look:

The blow-by-blow forum thread on Calguns is fascinating. New revelations are coming to light every day.

What an adorable little gun

There are some great videos of folks shooting it here. Almost no recoil!

Ahh yes, “teaming up to keep your family safe”

SayUncle pretty much nails it:

Not sure what’s sadder. That the press is a willing lapdog in this or that TSA is at bus stations.

Looks like the Brady Campaign is really in a tailspin. A financial one, I mean; we already knew they had no public support and their arguments made no sense. Looks like they’re $250k in the hole:

…But the truth is, because we’ve been fighting so hard on so many fronts, we’re facing a serious financial shortfall.

Not that it should be the least bit surprising, but it’s nice to see this line of reasoning advanced in major mainstream news outlets.

I never thought that hunting wild hogs with a 9mm handgun would be a good idea, but apparently with Extreme Shock ammunition you can do it, as GunBlast’s Jeff Quinn demonstrates: 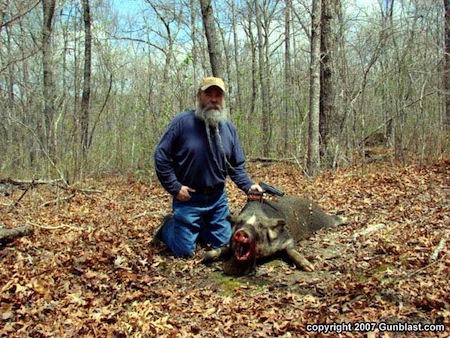